Get to know him better. 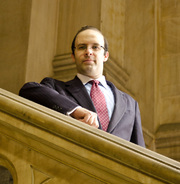 Jeremy Charles Rosenbaum is principal of the Law Offices of Jeremy C. Rosenbaum. He is an attorney with experience in court, at the negotiation table, and in the community.

An active member of the legal community, Jeremy serves on the Plaintiffs’ Employment Panel of the U.S. District Court for the Eastern District of Pennsylvania.

Jeremy earned his law degree from Benjamin N. Cardozo School of Law in 2010. He is a graduate of the University of Michigan, where he earned a Bachelor of Arts in political science. As an undergraduate, he was a Visiting Student at Oxford. He received a Master of Arts in Middle East Studies from Ben-Gurion University of the Negev.

He is admitted to practice law in three states: Pennsylvania, New Jersey and New York.

The Law Offices of

Check our website to learn more about Law Offices of Jeremy C. Rosenbaum and how we can help you with your legal needs.